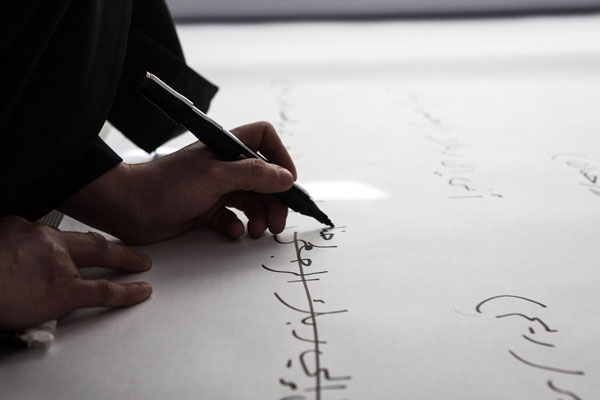 The social and political tensions related to large-scale migration in Turkey, especially from Syria, over the past decade are articulated in many ways such as marginalization and tensions around competitive income generation, settlement pattern in local neighbourhoods, skeptical and sensational media coverage of the ‘refugees as other’ and daily conflicts friction from language barriers and socio-cultural practices. This renders the shared public spaces and their related public practices as contested areas of interaction but also potential spaces for positive engagement.

Social and cultural practices are at the heart of our cultural identity. These practices shape and reflect the way we think, understand the world and communicate. This is especially relevant to refugees, where their social practices enable the continuity of their journey and the sustainability of their stay. It reminds them of their past; but it is also the way in which they claim the future.

The two countries have patterns of cultural commonalities and difference that make the integration process complex because they have roots in the past as well as the present. Elements of shared heritage between the Arabs and Turks are inherited from the 400 year colonization of the Ottoman Empire in the Middle East. This has created hybrid practices that are both similar and unfamiliar to both cultures, and opening up gaps of common grounds as well as historically frictions in the practice of the present, socio-politically, religiously and economically. Evidence of this past can be glimpsed through shared practices and religious affiliation (both Syria and Turkey are predominantly practicing Sunni Muslim constituencies), shared religious phrases, cultural practices, proverbs, specific commodities, rituals and food tastes. For the Syrian refugee community, Turkey is similar to home, but not home; perhaps interrogating the evolution of the power dynamics of the two culture’s relationship from colonization to refuge. This relationship is a mosaic of socio-cultural components that are suspended in time, between different pasts; the near past – the reality of their life in Syria, the distant past – cultural ingredients from the Ottoman era, and their current present.

Ankara, the city where our project, Migrating proverbs, commences hosts a large number of the Syrian refugee, they have settled in the older and poorer neigbourhoods of the city; taking over areas such as Ondar in Altindag. These areas of high-density refugee communities show new practices of spatial and materials representation and public visibility reflective of the cultural negotiations between the refugees and the locals. For example Ondar is adorned with Arabic linguistic landscapes, shop signs, Arabic food markets with Arabic types of vegetables readily available; Arabic language being spoken readily in most private and public services. This has increased the threat of alterity and has tapped into the historical tensions between the two communities. However, the local government regeneration project has created large area of demolition all over the city, displacing refugee and poorer local community into run down marginalized area in the city, within this shared urban poverty these two communities have found new shared grounds. (see figure 1, 2 and 3 and Drift Map courtesy of Ela Alanyali Aral; Mapping, Syrian Migrant Spaces in Ankara, ODTU Mimarlik Fakultesi 2018)

Both communities attempt to adapt to this new presence, and here, the project explores the ephemeral frictions experienced in the sharing of contested public space of the everyday with the aim of finding evidence of cultural common grounds within them, these can be tactics of acculturation employed by either side with the aim of testing means of integration and communication. Using art based socially engaged research and space of co-design and co-production, the project aims to reveal and extract these hidden tactics and to reinsert those shared and overlapping ones in a new playful form; aiming to initiate and facilitate cross-cultural dialogue and spaces of empathy between the Syrian refugee Community and the local Turkish residence. 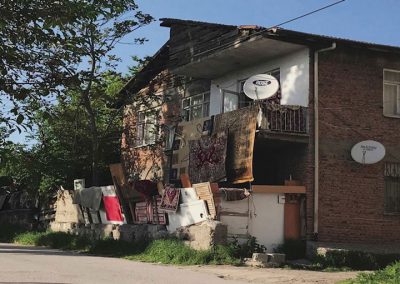 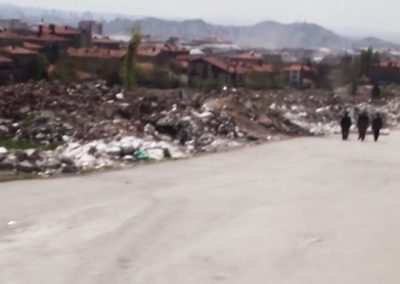 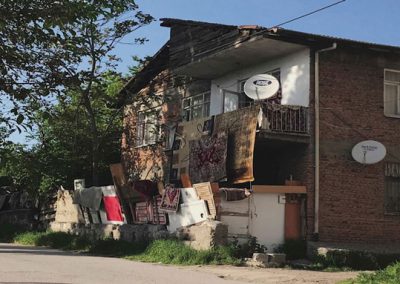 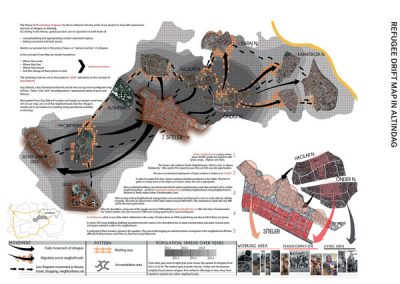 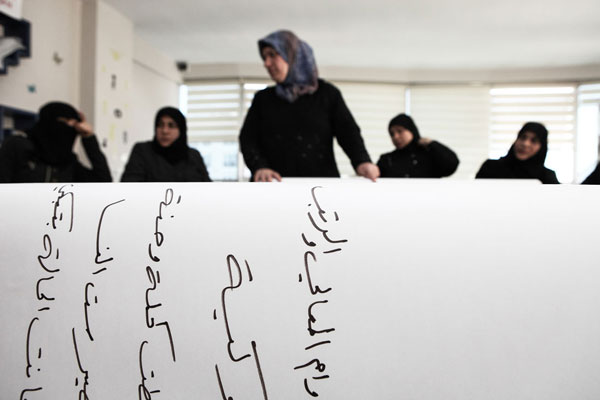 Migrating Proverbs’ is an action research project that explores aspects of participation and play through the use of social and cultural practices as tools for the engagement, cultural exchange, and development of social integration processes, between Syrian refugee and other minority ethnic groups with local communities in Ankara and Istanbul.

The ongoing research is exploring ways in which social and cultural practices, can act as a tool for revealing the refugee experience of place, and their articulation of identity and locality towards the host territory. More specifically, the research will make use of proverbs, as cultural artefacts that can be exchanged, translated, represented and put into circulation as tactics of negotiation and integration.

The action research project is structured in four parts.

1) The collection of proverbs and their associate practices as a means to tap into the migrant experience of space through the narration of their moments using inherited, modified or invented proverbs. The personal narratives were documented, as were their historical narratives. Cross-cultural dialogue was facilitated through efforts to translate and match these proverbs with their Turkish counterparts. Issues of literacy, bi-linguism, political orientations, geographic locality, levels of education, were raised through these proverb recollection and identifications processes.

2) Transcription:
The reproduction of proverbs onto new forms of representation/ material objects/ artifacts through skills exchange workshops and collaborative production processes (archive). Collaborating with local NGO (Assam) and local Syrian refugee women, the workshops drew on the participants’ skills of narration, calligraphy, printing and sewing to produce proverb-inscripted artifacts for the use in the every day, these ranged from napkins, bags to book covers or scarves. The women designed and produced the artifacts to be distributed into the city, making personal decisions that negotiated their agency, visibility and how their identity is inserted into the public realm; as such some artifacts were hidden and anonymous, some were subversive and others were comfortably visible. The ‘production space/art studio’ became a creative non-hierarchical space of exchange, deeper research, production, conversation and representation.

a) The deployment of a socio-spatial intervention into the every day spaces of the city, by disseminating the proverb-scripted objects as inserts into existing local cultural practices associated with systems of distribution – like the delivery of tea/coffee. The public interventions are forms of visibility and representation of the migrant communities in the public realm, one aspect of the right to the city as active citizenship. Questions of territories, agency, methodological fluency, locality and political tolerance where some of the issues raised.

b) The deployment of a socio-spatial interventions and new knowledge and analysis tools into new setting to new audiences as another form of material representation and visibility, such as conferences, art galleries, educational environments, the use of research for policy and so on.

The project rethinks existing passive and consultative processes of community engagement and Knowledge extraction, which can be similar to processes of legal status assessments and evaluations. Thinking outside the hierarchies of the question and answer format, the project explores art based and socially engaged active processes that develop agency, nonhierarchical exchange mechanism and capacity building. By working collaborating and co-producing the content and mediums of visibility, shared agency is built, and skills exchanged participants lead and facilitate making. In the small but multiple scale of interventions, the project creates intimate and genuine spaces of conversation and cultural overlap; these work towards the breaking down the representation of the ‘refugee’ as an element of alterity and threat. In addition, the art process promotes confidence and diversity through ‘subjectivity’ and multiple realities. The studio environment as a space of skill sharing allows relationships and conversations to evolve slowly over time as the co-production process is unfolding. The playful nature of the art production process ensure that the ‘outcome’ evolves over time and is an unpredictable conclusion reached by the whole research and production team. 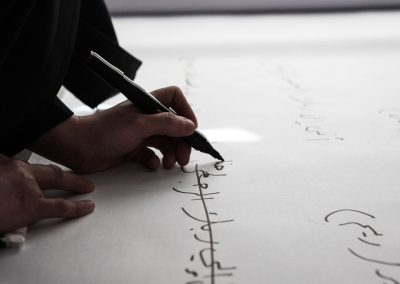 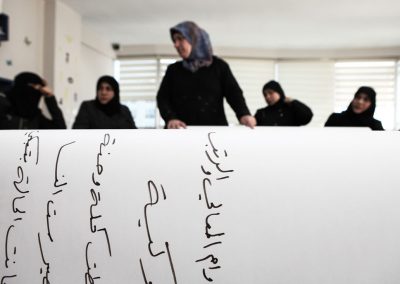 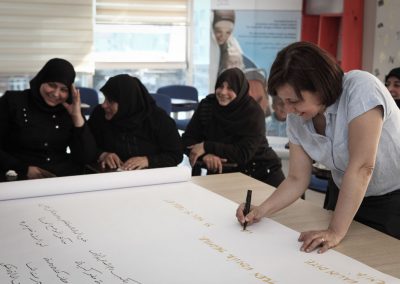 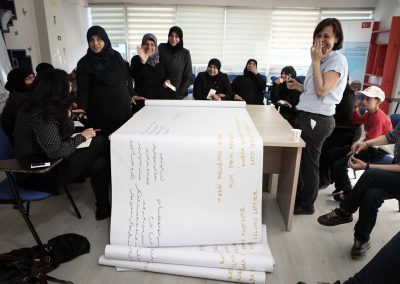 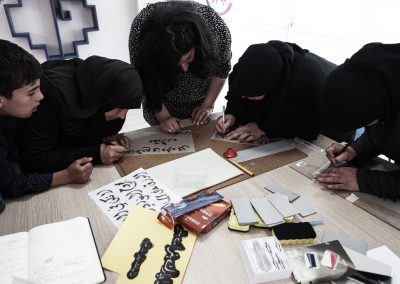 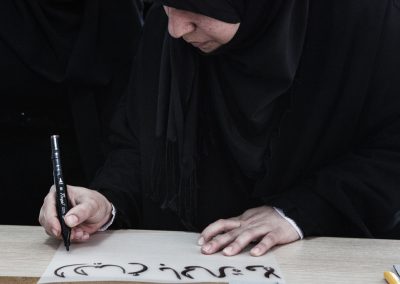 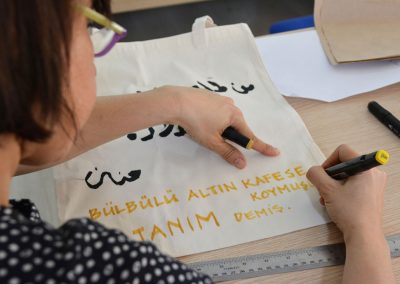 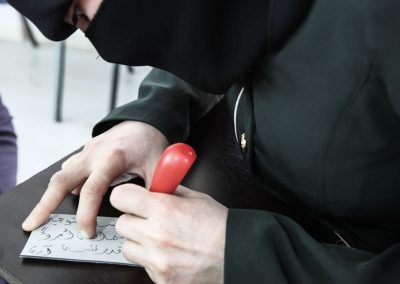 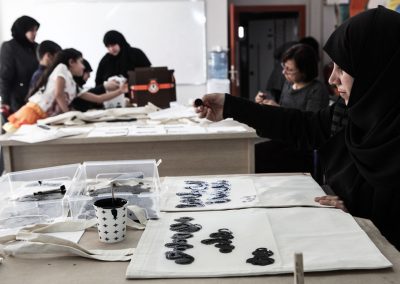 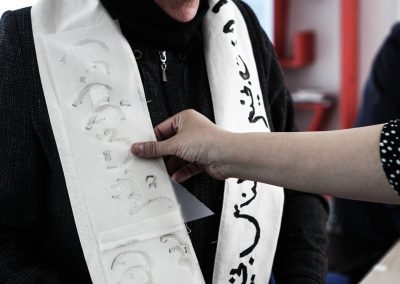 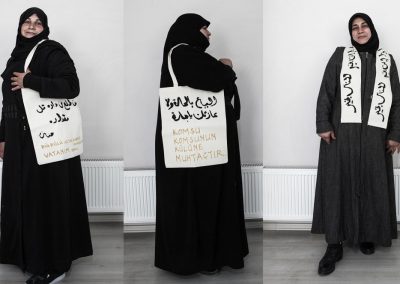 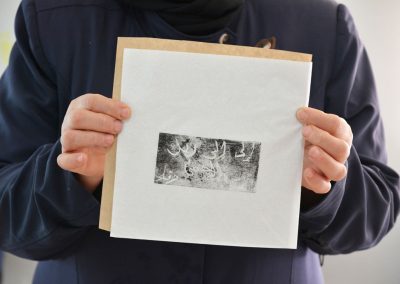 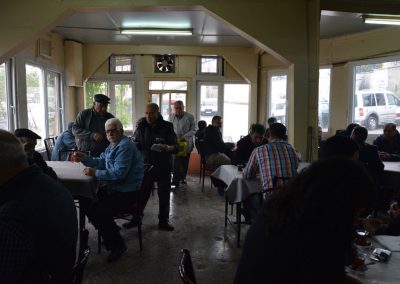 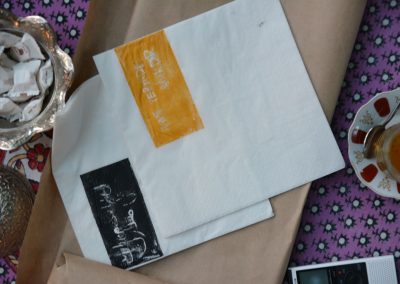 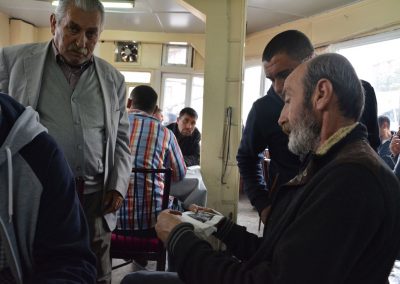 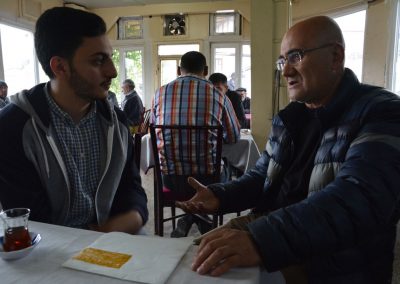 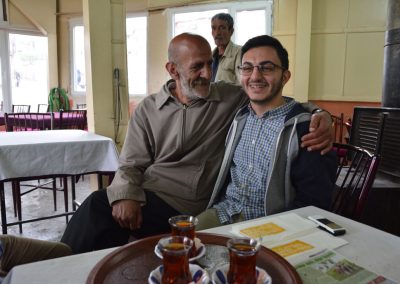