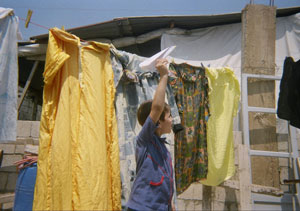 Donors: A.M. Qattan Foundation, Norwegian People’s Aid, Ajial Gallery
Partners: Beit Atfal Assoumoud, Ghassan Kanafani Cultural Foundation, Association Najdeh and Sophana Sophanpanich
Play Space looks at the way the children transform the limited camp spaces (and absence of playground and childhood spaces) through their patterns and practices of play, and explores the way in which this specific urban landscapes and community practices prompts the invention of new games and play spaces.
Play as social negotiator:
While children in cities may be more accustomed to defined playfields or ‘playgrounds,’ children in the camps use the entire expanse as their play space, establishing a hidden topography of play through their creative misuse of the architectural elements around them and a negotiating ‘right of space and right of play’ in these public spaces. In response to the absence of designated play areas a grandmother’s interlocking washing lines become limits of cities to be crossed with paper planes and dripping water pipes inspire new ways for marking spatial territories and rethinking waste. Looking at how children transformed, negotiated and appropriated the limited camp spaces with their patterns and practices of play revealed that the complexity of the spatial and social environments and of the refugee values and mind sets.  Play emerged as a copying mechanism, an inventive means by which to push boundaries and ask questions but also as a mechanism to engage with the present, a time that is much forgotten for refuge communities.  Play Space looked at play as a means to rethink ideas about waiting and transience and asking about what is possible in the short term and in small scale in relation to resettlement and sense of belonging. 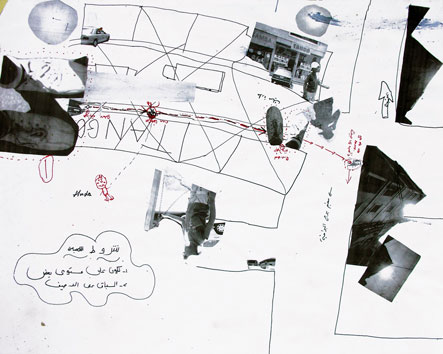 The project is composed of two complementary stages. The first, an individual research enquiry, building on the children’s existing invented (at times also inherited and modified) games and exploring how they have been made possible by the camp’s spatial and social organization. The second, a propositional group exercise, sought to intervene in the camp’s spatial structure through the creation of a series of play interventions proposed for play in the camps; these set up a temporary landscape of play or a new transient and fragmented playground.

Through the mediums of research, photography, text, and drawing the children documented their invented games. They began brainstorming through a series of visual mind-maps that best depict these games. The children then used disposable cameras to photograph and document their processes and spaces of play. While doing so, they engaged in interviews with spectators and players (family, friends, neighbours). These also made a series of spatial drawings of the site, the body and the experience. They collated the material into extensive manuals which narrated the story of the game, simultaneously introducing the social and spatial practices that inspired them.
The second phase inserted a series of play interventions into the camp’s spatial structure in turn setting up a new transient play scape, a fragmented playground.
The play interventions were both physical and spatial — relating as much to the body as to the sites of play and its inhabitants; they were in the camp. They were tested speculatively in different sites in the camp, at each new players were invited to take part creating links with an older generation often unaware of the children’s inventive use of the camp and its spaces.
The work was displayed in Agial Gallery where their families, friends and the public attended the opening night. 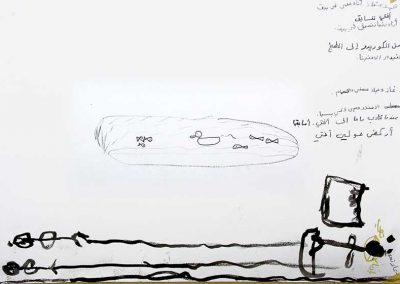 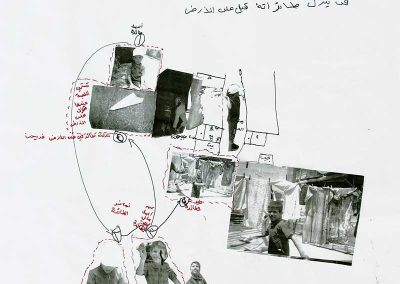 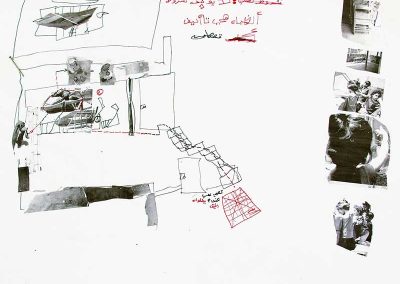 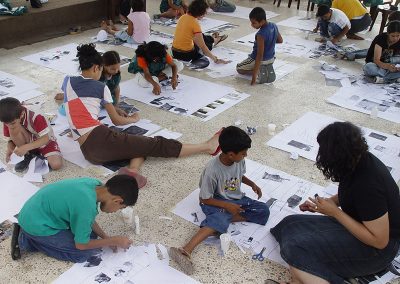 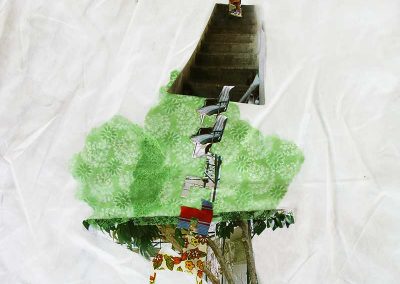 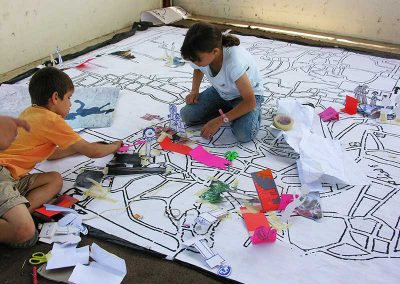 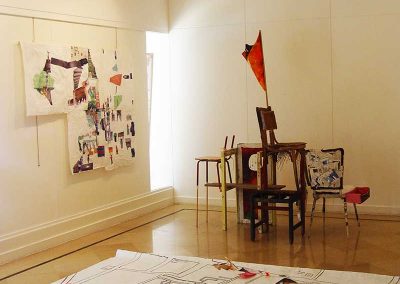 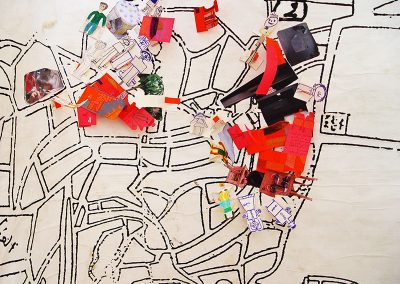 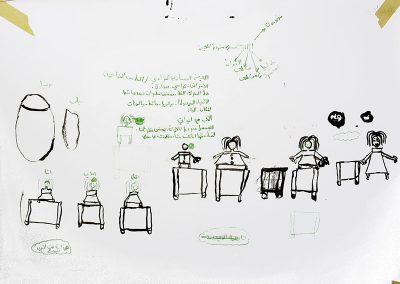 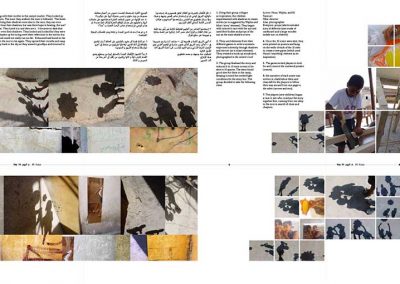 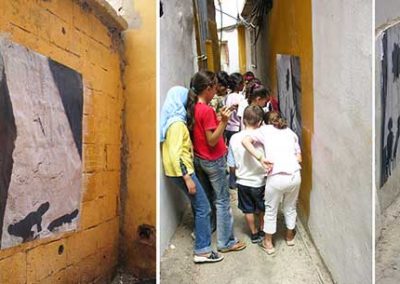 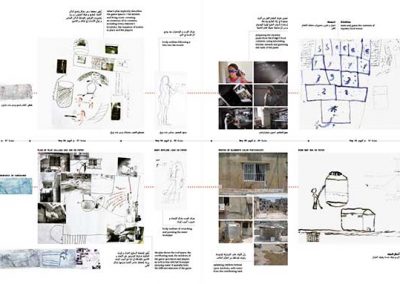 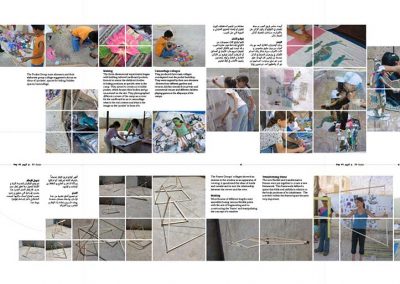 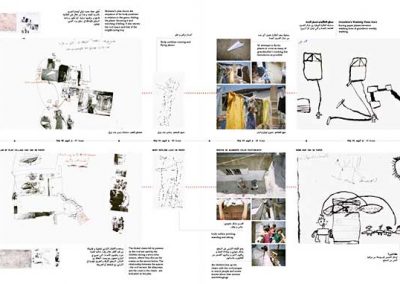 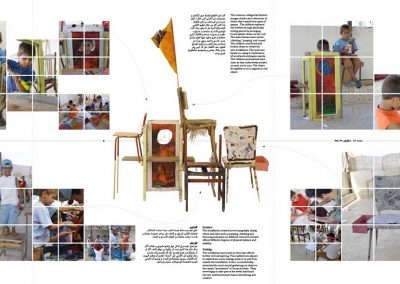 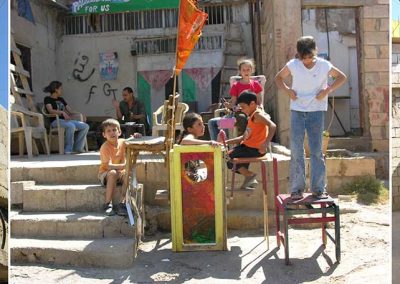 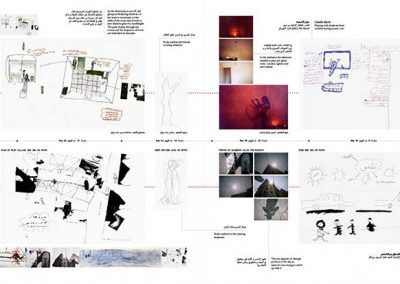